Imagine the Adirondacks Without Hemlocks 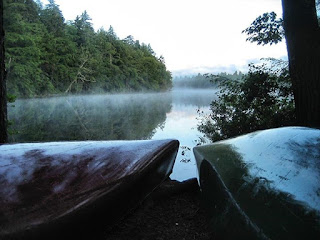 Sometime after 4am I woke up. I left the tent and stepped into the beams of the setting full moon and walked a short distance to the shore of Polliwog Pond. The dawn was just beginning to show above the old hemlock stands, mist swirled above very still water, and then the loons began to call to each other in their old, melancholic song. In those few moments as I stood in the simultaneous light of the moon and the dawn and listened to the loons call, I was transported.  I was in an ancient place.

That moment was pivotal for me this summer. It is hard to describe such moments and the impact they have on our thoughts and decisions.  In that moment the reality of what could be lost lodged deep.

The day before, I had walked up away from the waterside site, where I was camped with colleagues and friends on a week-long Leave No Trace course, to a height of land where I recognized its old growth forest structure. Most of the trees here, and at our campsite on the shore below, were hemlock. 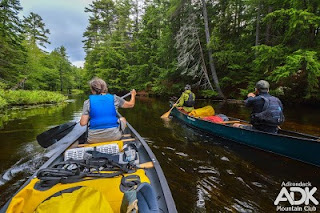 During the past year I have had a growing anxiety. After attending a Citizen Science Forest Pest Monitoring workshop in Allegany State Park with New York State Office of Parks (OPRHP) Invasive Species Control Field Director Robert O’Brien, who explained the threat of Hemlock Woolly Adelgid (HWA) (Adelges tsugae) to the Eastern Hemlock species (Tsuga canadensis), I began to realize the impact that the loss hemlocks, a foundation species, would have on the Adirondacks. Here, especially in areas like Lake George, Keene Valley, and in much of the Lake Champlain Basin (including its far edge in the Saranac Lakes Wild Forest and the St Regis Canoe Area) hemlocks are very dense.

Foundation species are critical species in the habitats they help create. In the case of hemlocks they moderate stream water temperatures for trout and other animals, provide a buffer for nutrient inputs to maintain water quality, stabilize shallow soils especially in steep gorges, provide shelter for animals and plants which is especially important in winter, provide critical habitat for migrating neo-tropical birds, and provide acidic substrate for lichens.

Anyone who has hiked, paddled, or driven through the Adirondack Park should realize what we will lose. If we do not act quickly, we are likely to lose the species.

We only need look to places such as the Great Smoky Mountains for an example of the devastation in store for the Adirondacks. Closer to home, decline of hemlocks is already well underway in the Catskills. HWA has been advancing quickly through New York State, and now is at the doorstep of the Adirondack Park (and likely is already present).

You can help prevent the loss of hemlocks in the Adirondack Park
•    Become a Backcountry Forest Monitor. RSVP for an August 29th  10am to 4pm Workshop in Lake George.
•    Attend a presentation by Cornell’s Mark Whitmore: The Hemlock Woolly Adelgid. A Formidable Pest We CAN Manage. The presentation will be held at the the High Peaks Information Center at 8pm on August 29.
•    Sign-up for the Backcountry Forest Monitors Project to stay informed about upcoming outings and trainings.
•    Sign-up to partner with the Adirondack Park Invasive Plant Program (APIPP)

What happens when HWA is discovered?

Last year Cornell University’s Mark Whitmore and the Department of Conservation (DEC) and Cornell University conducted a model early detection response to HWA in the Zoar Valley, treating almost 600 hemlocks to help them resist HWA until biological controls can be successfully introduced. OPRHP has conducted a smaller scale, but similar response in the Allegany State Park.

If we do not act, we are looking at a complete change to the face of the Adirondacks with resulting impacts to environment and economy that would come from such wide-spread habitat destruction and change. The time to act was yesterday, but if we act now, there is still hope to save hemlock stands in the Adirondack Park.

Read more:
•    HWA in the Adirondacks:
A Threat to Hemlocks
Flies Could Avert Hemlock Threat in New York
Watch For Hemlock Woolly Adelgid
•    Hemlock decline in the Catskills
•    Loss of foundation species in forests
•    Discovery of HWA in Allegany
•    Zoar Valley Response Model
•    Changes to the hydrologic cycle in forests with the loss of hemlocks
Loss of Eastern Hemlock will Affect Forest Water Use
The Successors of Giants

This project was funded by an agreement awarded by the Great Lakes Fishery Commission of the New England Interstate Water Pollution Control Commission in partnership with the Lake Champlain Basin Program. NEIWPCC manages LCBP’s personnel, contract, grant and budget tasks and provides input on the program’s activities through a partnership with the LCPBP steering committee.  The viewpoints expressed here do not necessarily represent those of NEIWPCC, The LCBP’s steering committee, or GLFC, nor does mention of trade names, commercial products, or causes constitute endorsement or recommendation for use.

About the Author: Catherine Pedler